Tai Chi certainly isn't a religion for me, more a way to bring a calm inner mind and build balance, strength and discipline.

Tai Chi is practiced for self-defense, physical and mental health, and meditation.

It’s associated with many benefits - from stress relief to mindfulness and improved balance.

Tai Chi classes can be found all over the world, and many Tai Chi practitioners are seniors, as the practice offers a low-impact form of exercise.

Tai Chi is derived from the term ‘taiji’ -  an ancient Chinese cosmological concept for the flux of yin and yang.

However, the deep connection between the body and mind in Tai Chi, and its focus on the natural balance of elements, leads many to presume that this is a religious practice, despite the fact that today many classes exist solely for health benefits.

In this article, I'll be discussing the origins of Tai Chi, and why there’s so much confusion over the practice and its purposes, meaning it often gets tied up with religion and philosophy. 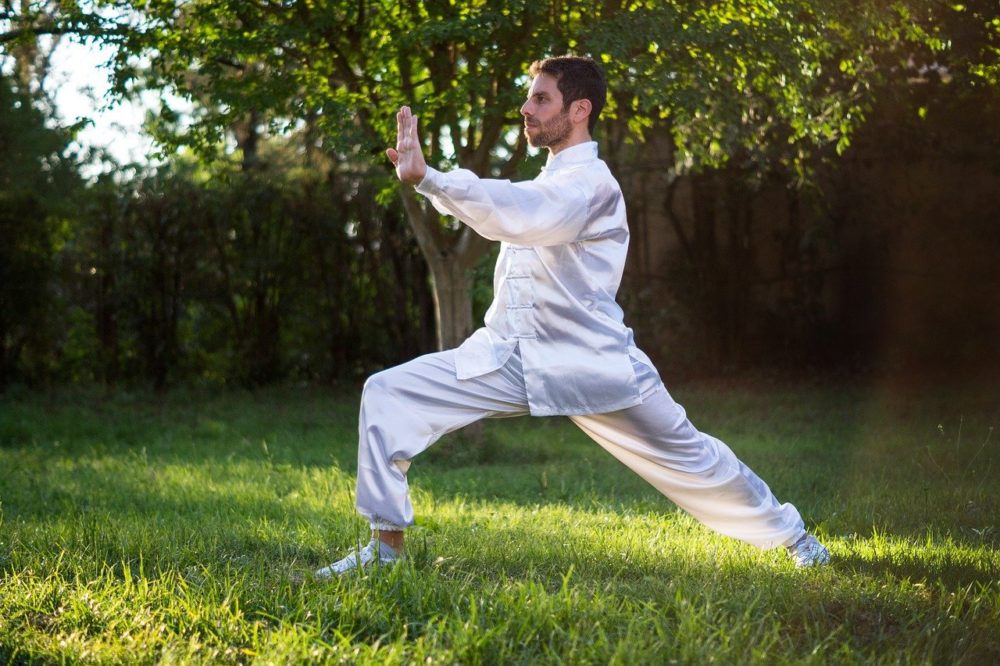 Table of Contents -
1 The Origins of Tai Chi
2 Confusion Around Tai Chi
3 Tai Chi today
4 Is Tai Chi a Religion?

The Origins of Tai Chi

Tai Chi is frequently associated with early Buddist or Taoist traditions, with some suggesting Tai Chi was born out of such monasteries.

The central principles of Tai Chi are said to be derived from the Chinese philosophy of Taoism.

Taoism is the philosophical tradition of living in harmony with the ‘Tao’ - which refers to the natural balance in all things and the need to live in accord with the patterns of nature.

Taoism suggests that everything is composed of two opposites which are complementary elements that provide perpetual balance - just like yin and yang.

The exercises practiced in Tai Chi are equally balanced between yin and yang.

The ‘yin’ is the soft, pliant, yielding, and feminine side, while ‘yang’ is associated more with masculinity, strength, and rigidity.

Together the two form a perfect whole.

Some Tai Chi schools also claim that the practice is based upon the theories of Song dynasty Neo-Confucianism, which is a conscious fusion of Taoist, Buddhist, and Confucian traditions - especially the teachings of Mencius.

Such schools believe that the theory and practice of Tai Chi were created by the Taoist monk Zhang Sanfeng in 12th century China, which was the same period in which the principles of the Neo-Confucian school of thought were growing popular among the intellectual classes.

However, modern research has cast serious doubts on these notions, and claims that tai chi was connected to Zhang Sanfeng did not appear until the 19th century.

Besides, Taoism would not even be considered a religion, but rather a philosophical outlook or way of living.

So even if it were connected to Taoism, Tai Chi would not be considered religious.

However, further confusion was caused a few years back when an English vicar banned Tai Chi in his church hall, claiming it was an aspect of “Chinese Taoism religion.”

Again - this is incorrect, as Taoism is not a religion.

This is not the first time this has happened either, as one teacher outlines in his blog.

Frustratingly, the confusion over the origins of Tai Chi comes from a lack of information.

The slow movements and strong connection between the body and mind seem to be bewildering and mystical to some people, who rather than getting further acquainted with the practice, simply dismiss it as a form of Taoism - without knowing too much about Taoism nor Tai Chi!

Similar mistakes and misconceptions have occurred in the past over yoga too.

Yoga, like Tai Chi, is a form of exercise and movement that may help people meditate or focus on their prayer better, but they are not religious practices in themselves.

Tai Chi has become a popular form of treatment, exercise, and mindfulness for many people today as the benefits become more widely known.

Over the last twenty years, Tai Chi classes based purely on the health aspect have become popular in hospitals and clinics, as well as community and senior centers.

The slow movements of the practice, with the focus on balance and breathing techniques, have become widely embraced by people of all ages, but especially baby boomers and seniors who are looking for a form of exercise that offers many health benefits, without being too strenuous or challenging.

Seated Tai Chi - performed on a chair - has also become popular for stress reduction and mindfulness, particularly among the elderly.

Is Tai Chi a Religion?

Tai Chi is steeped in ancient Chinese tradition and is linked to several origins, individuals, and philosophies.

However, today Tai Chi is practiced mainly for its benefits on physical and mental health.

Tai Chi is certainly not a religion, it’s a practice that has links to Taoist principles and Buddist philosophy, but these merely inform the central idea of balance and yin and yang.

Despite Tai Chi being called religious or anti-christian in the past, this is more a result of misconception and a lack of understanding, and as I said, Tai Chi is mainly practiced today for its numerous benefits, including stress relief, meditation, and offering low-impact exercise.