I'll admit for years I thought Qi Going and Tai Chi were exactly the same and couldn't differentiate between the two.

And the links between Qi Gong and Tai Chi do run deep.

Both are traditional Chinese practices that have developed over the course of centuries.

For an outsider, it can be difficult to see the immediate differences.

If you’ve been interested in exploring either, you may be curious to gain a better understanding of what sets the two apart.

The line between them isn’t always clear, as both have developed alongside each other throughout the years.

An experienced practitioner of Tai Chi will recognize parts of it in Qi Gong, and vice versa.

Tai Chi is commonly described as a form of Qi Gong.

Crucially, Qi Gong brings the attention to the internal, without the martial arts of Tai Chi.

To understand the differences, first you must understand each practice on its own (see also differences between QiGong and Nei Gong).

Table of Contents -
1 What is Qi Gong?
2 What is Tai Chi?
3 What’s the difference between Qi Gong and Tai Chi?
3.1 Origins
3.2 Movement
3.3 Internal vs external
3.4 Martial arts vs Wellness

What is Qi Gong?

Qi Gong is a form of meditation that uses simple movements to connect and heal the mind.

When practicing Qi Gong, a person will use deep breathing and slow movements, while focusing on a calm inner. 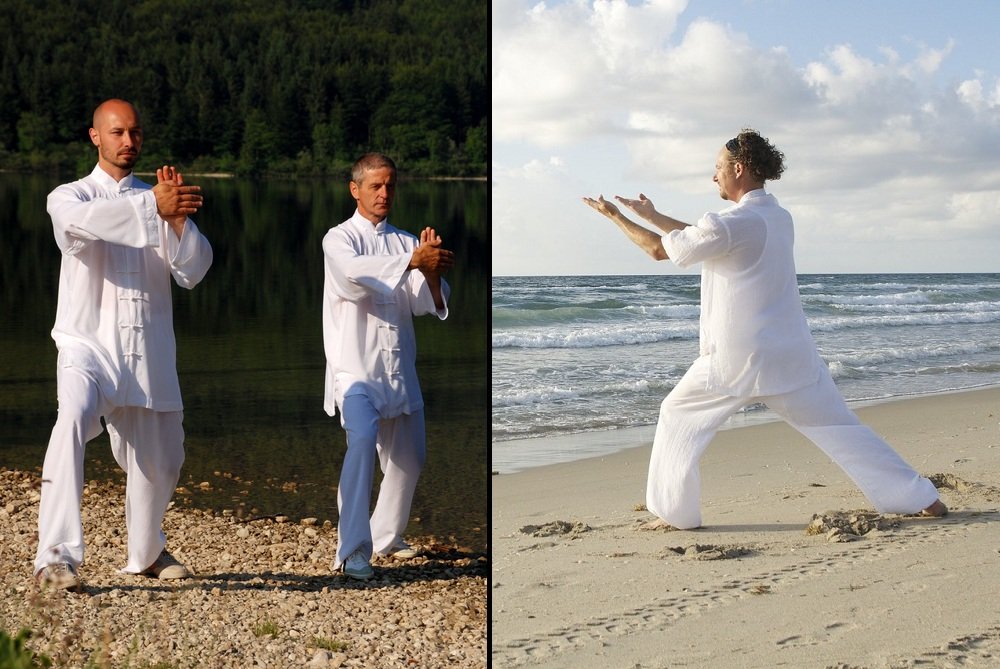 What is Tai Chi?

Tai Chi is a form of martial arts that emphasizes using continuous movement modelled after the elements of nature.

Moving is an essential part to Tai Chi.

In Tai Chi, the body and mind are seen as being in harmony.

We access control over the mind via the body, and control the body with the mind.

Tai Chi is a much more rigid practice (even if the movements are anything but).

The precise forms of Tai Chi form the heart of the movement.

What’s the difference between Qi Gong and Tai Chi?

Tai Chi is a martial art, whereas Qi Gong is an internal process with movements.

There are many similarities, and they both stem from similar origins.

However, Qi Gong focuses much deeply on the internal process of meditation, where Tai Chi emphasizes the body and movement.

Both Qi Gong and Tai Chi are ancient Chinese practices that put a focus on meditation and energy.

A simple explanation is that Tai Chi has been derived from Qi Gong.

This is somewhat true.

However, there are Buddhist and Confucian forms of Qi Gong, that are separate to Tai Chi and Taoism.

Elements of Qi Gong are found within Tai Chi, but that doesn’t necessarily mean Tai Chi is a form of Qi Gong.

While both are popular, Qi Gong is much more closely integrated in general living in China.

The practices of Qi Gong form large parts of many religions, and can fit easily into daily life.

Much of the confusion is surface level.

As both practices involve slow movements, from the outside there may not seem much difference.

Similarly, Westerners tend to pronounce “chi” and “qi” the same.

This leads to confusing them for the same thing.

However, the “qi” of Qi Gong refers to life energy, where the “Chi” of Tai Chi translates most closely to ultimate.

Very different meanings, as you can see.

While both Qi Gong and Tai Chi use slow movement, they use them in different ways.

In Tai Chi, there’s a great focus on form and position.

The body and how it reacts is a primary focus.

These Tai Chi forms are precise, and continuous.

A continuous Tai Chi movement is used to develop power and move energy.

A movement in Tai Chi is generally more complex, and takes time to learn.

In Qi Gong, the movements are less complicated and allow for a greater variance.

Some forms are repeated continuously to feel the benefit.

Sometimes, Qi Gong doesn’t use movement at all, but instead draws focus to breathing.

Because of this, the movements of Qi Gong are more adaptive.

There’s much less pressure on performing every movement exactly.

Instead, it can be varied to suit the person.

To sum up, the movement and form plays a greater role in Tai Chi than it does in Qi Gong.

Where Tai Chi puts emphasis on the external movement, in turn Qi Gong has a strong focus on the internal.

Qi Gong is an intense, and deep form of meditation.

It can send you far into the realm of consciousness, and encourages an exploration of the mind.

The physical movements of Qi Gong are secondary to the internal connection.

This is why sometimes Qi Gong has no movement at all.

Conversely, in Tai Chi those movements are inseparable from the internal work.

Tai Chi builds a harmony between the internal and the external.

When done correctly, you should feel the body and mind as one.

This leads to a light form of meditation, as the mind doesn’t focus so fully on itself.

As you can see, despite some similarities Qi Gong and Tai Chi remain separate.

For regular practitioners of either, the differences will be readily apparent.

Perhaps the easiest way to explain it is Tai Chi is a system for martial arts, where Qi Gong is a system of wellness.

If you’re interested in a light meditation that engages the body, Tai Chi is the right choice.

With Tai Chi you learn how to move with smoothness, and distribute energy across the body.

While the meditation aspects are important, they aren’t the main focus.

If, on the other hand, you want a deeper exploration of mediation, and a focus on healing, Qi Gong is a better choice.

The movements of Qi Gong (how exactly do you pronounce that?) are adaptable and less complex.

Instead, the internal becomes the focus.